SquareTrade Labs: Apple Solves its iPhone 6 Plus Bend Problem but Ion-Strengthened Glass Fails to Protect from Most Common Phone Hazard

September 28, 2015 – SAN FRANCISCO – Are the new Apple iPhone® 6s and iPhone® 6s Plus really the best yet? SquareTrade®, the highly rated protection plan trusted by millions of happy customers, tested the new Apple iPhones and Samsung Galaxy Note®5 with a series of drops, dunks, bends and temperature shifts to find out whether these new flagship phones are stronger than their predecessors. SquareTrade Labs found that the iPhone 6s Plus fared better than its predecessor thanks to its 7000 series aluminum, the iPhone 6s performed at par with the iPhone 6, and the Note5 outdid the rest inside the new Thermo Rig. However none of the phones survived SquareTrade's face down drop test.

Knowing that extreme temperatures damage a phone's ability to hold a full charge and therefore shorten the lifespan of the phone, SquareTrade added the Thermo Rig, designed to analyze battery life performance, to its testing lineup for the first time. These new tests simulate common activities that expose phones to the elements, like leaving a phone in a hot car during the day (110°F) or on a porch at night during winter (0°F).


"While Apple touts the iPhone 6s and 6s Plus as the most advanced iPhones ever, we still found them at the mercy of the most common of all problems - the accidental drop on a hard surface," said Jessica Hoffman, vice president of global communications for SquareTrade. "On the flip side, both manufacturers have responded to bendgate with significant improvements on the three phones we tested. This is great news for consumers."

SquareTrade's Breakability Score fills the gap left by traditional reviews. SquareTrade carries out a stringent set of tests on new phones and awards them a rating. This Breakability Score is based on a number of factors, from physical characteristics to the results of SquareTrade's drop, dunk, bend and extreme temperature tests. The higher a device scores on a scale of 1-10, the higher the risk of it breaking due to an accident. 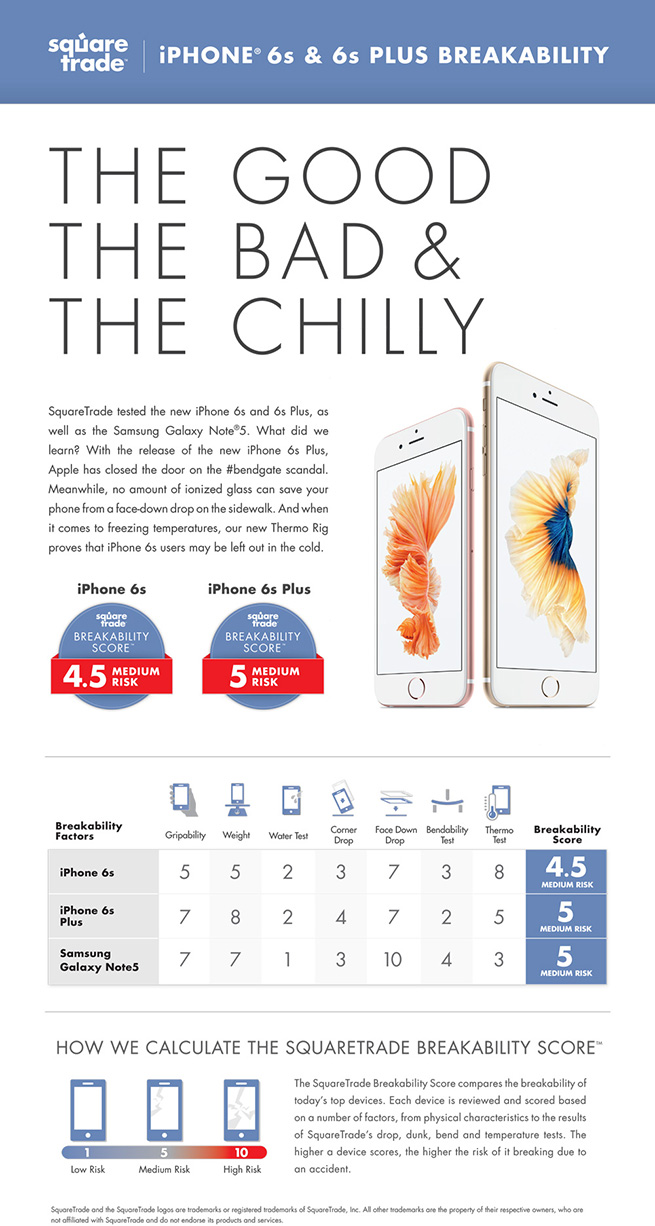