As iPhones become an increasingly central part of our daily lives, accidental damage is 10 times more common than loss or theft. The study also shows that younger consumers are clumsiest with their iPhones: one in two iPhone owners under 35 have had an accident.

The top five iPhone accident scenarios according to the study are:

“Today’s devices are racing to be thinner and lighter, with little regard to durability. And yet our lifestyles make them more vulnerable than ever to accidents,” commented Ty Shay, CMO at SquareTrade. “We were astonished at how many people drop their phones in the toilet as well as how frequently an innocuous drop from the hand actually killed the device. We look forward to seeing what the new iPhone 5 users report with regard to durability.”

SquareTrade’s recent study indicates that due to the often costly expenses associated with repairing damaged iPhones, many consumers often resort to “desperate” measures. For example, 11% of iPhone owners are currently walking around with a device that is cracked and 6% have taped up their iPhone as a solution. 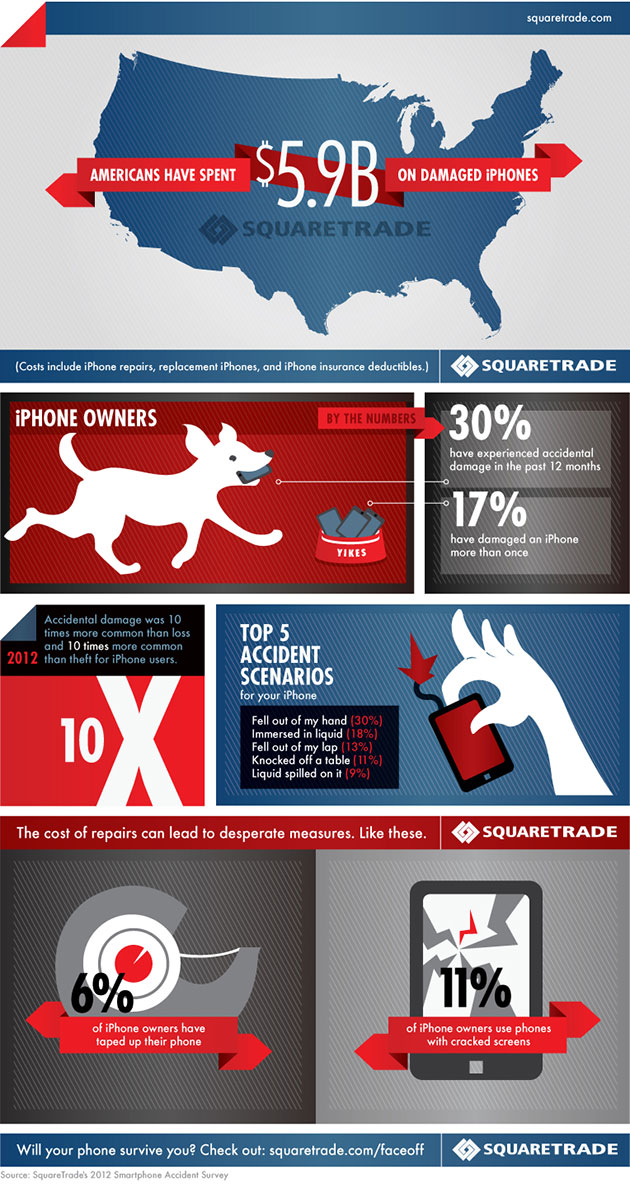 About SquareTrade
SquareTrade is the top-rated protection plan trusted by millions of happy customers for its fast and exceptional service. SquareTrade protects mobile devices, laptops and tablets, and other consumer electronics and appliances from malfunctions, accidental damage and life’s frequent mishaps. Unlike old-fashioned warranties, SquareTrade is designed for today’s consumer and uses innovative technology to deliver a zero hassle claims process. SquareTrade has more than 190,000 fans on Facebook, consistently wins industry awards and receives thousands of 5-star reviews for its legendary customer service. Top retailers around the world offer SquareTrade, achieving a 200% increase in sales on average and happier customers. SquareTrade’s rapid transformation of the warranty industry attracted one of the largest private capital raises in 2012, with a $238 million round led by Bain Capital and Bain Capital Ventures. Headquartered in San Francisco and London, SquareTrade is privately held. For more information, go to www.squaretrade.com.