SquareTrade Labs: The Samsung Galaxy S7 and S7 Edge Prove to be Water-Resistant, but the Apple iPhone 6s is Still Sturdier When it Comes to Drops and Tumbles

Latest Generation of Samsung Galaxy Phones Square Up Against SquareTrade Labs’ Arsenal of Bots, including the new Deep Water DunkBot and TumbleBot

SAN FRANCISCO - March 14, 2016 – SquareTrade®, the highly rated protection plan trusted by millions of happy customers, has once again shone the spotlight on the durability of the latest smartphones as it puts the Samsung Galaxy S®7 and S®7 edge through its Breakability tests. With Samsung making a big splash about the water-resistant capabilities of its new phones, SquareTrade sought to uncover whether these would prove to be the “splash dunk” advantages needed to overtake rival, Apple. SquareTrade Labs found both the Galaxy S7 and S7 edge to be water-resistant, but they still stumbled when it came to screen durability. The iPhone® 6s, with its ion-strengthened glass, proved to have the sturdiest screen of all.

Always up for a challenge, SquareTrade Labs added two new robots for the latest round of Breakability tests: the Deep Water DunkBot and the TumbleBot. The Deep Water DunkBot submerges phones under five feet of water for 30 minutes. To mimic the repeated tumbles that smartphones often take, SquareTrade also created the TumbleBot, which continually drops devices in an enclosed chamber at a rotational speed of 50 revolutions per minute for 30 seconds.

“Samsung’s new phones may hold up to an impressive amount of water, but we’ve found that they still struggle to keep up with the iPhone when it comes to screen durability,” said Aileen Abaya, director of communications at SquareTrade. “So while the S7 and S7 edge may be perfect for underwater adventurers, those of us who are clumsy or accident-prone should still be careful about drops and tumbles.”

SquareTrade's Breakability Score fills the gap left by traditional reviews. SquareTrade carries out a stringent set of tests on new phones and awards them a rating. This Breakability Score is based on a number of factors: from physical characteristics to the results of SquareTrade’s drop, dunk, bend and tumble tests. The higher a device scores on a scale of 1-10, the higher the risk of it breaking due to an accident. 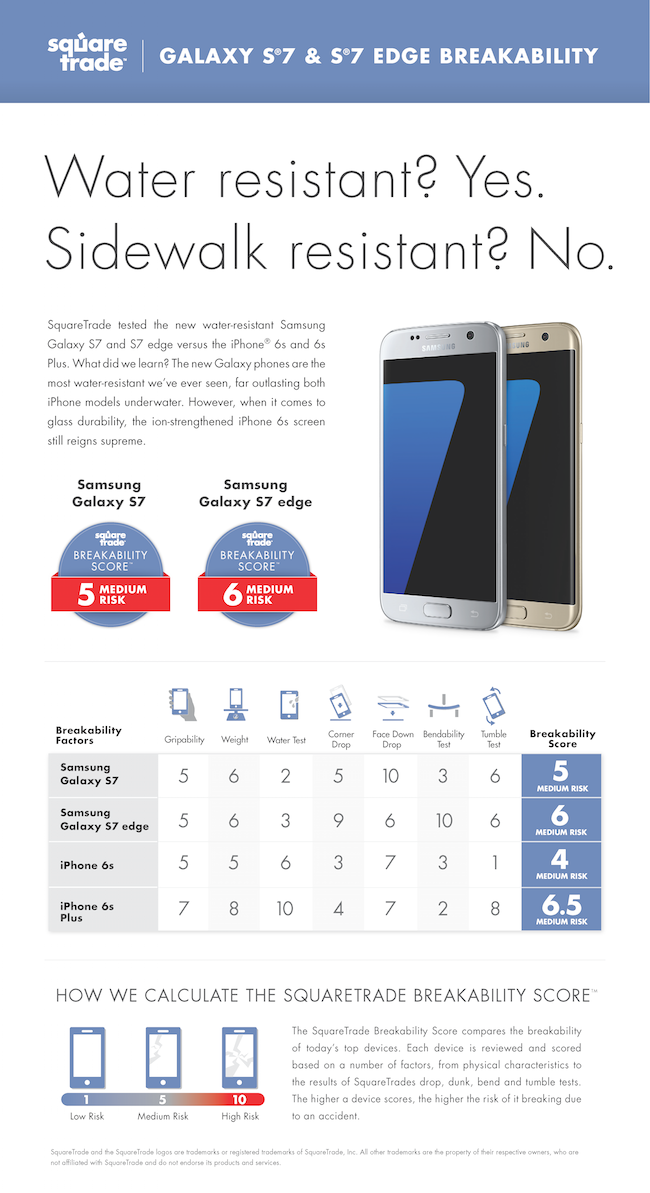